With the warm weather winding down and the colder months closing in, now is the perfect time to get to know all about that most prevalent of fall pests: the stink bug. Most famous, or infamous, for the pungent odor that they produce, there’s more to stink bugs than meets the eye, or the nose, as the case, unfortunately, may be.

Not many people are aware of this skin-crawling fact, but there are over 4,500 different species of stink bugs! Of that multitude, North America is home to about 200 species. Official records document that these malodorous mites are present in 41 states American states and numerous Canadian provinces. They can be found in environs from California to New England, such is their versatility. This incredible range of habitats makes the following fact seem almost ludicrous.

As unlikely as it sounds, stink bugs came to North American shores inadvertently. Even more bizarre is the fact that they’ve only been here since to new millennium. These ponging pests originate in Asia, but they were unintentionally introduced to this continent, sometime around 1998.

An infestation inside a shipping crate full of produce bound for Pennsylvania, these stinky stow-aways found ready breeding grounds across the North American continent. Their populations have grown exponentially in the decades since. Their label as an ‘invasive species’ is an apt way to describe their aggressive occupation of North America.

3. The Reason For The Stink Is Not What You’d Think

No doubt the one thing that everyone knows about stink bugs is that they are aptly named. But few people can tell you why they have such a unique pestilential perfume. The well-known odor arises when the bugs exude a liquid from abdominal pores. The bugs choose when and where they secrete their smelly liquid, it is not an automatic response to predators.

The odor itself is composed of the trans-2-octenal and trans-2-decenal molecules. Odd as it sounds, these very two compounds are often employed by the food industry to add flavor and fragrance to foods, although thankfully not together. When they are combined, the resulting smell is so nasty as to deter all but the most determined animal predators.

Due to their status as invasive, non-native species, stink bugs don’t have any natural predators in the United States. Partly owing to their appalling stench, not to mention the fact that they do not originate in the U.S. they have been able to breed prodigiously. Despite their lack of any natural predators, there are some insects, birds, and reptiles that have been known to eat stink bugs on occasion. Excitingly, there is a species of parasitic wasp that has been known to attack stink bugs and their offspring. Since stink bugs don’t have many predators to worry about, their predators are seldom able to make a dent in their numbers. Evidence demonstrates that their pong is vital for their survival.

5. Stink Bugs’ Smell Has Many Uses

It goes without saying that the primary use of their stink is to deter would-be predators. If ever they feel (if that is what you want to call it) threatened or if they are in danger, they will exude their unique perfume. Stink bugs exude different fragrances when they want to reproduce or to alert other stink bugs to a choice breeding or resting spot. Squashing a stink bug will also release an odor, but unlike the odor they purposefully exude to attract other bugs, the stench from squishing a stink bug won’t attract others.

Extremely prolific, female stink bugs can lay up to 400 eggs in their lifetimes! Considering that this lifespan is about six to eight months, it’s a pretty remarkable feat. Most females will lay a cluster of between 20 and 30 eggs at a time. The new stink bugs hatch in 4 to 5 days. It takes them 40 to 60 days for them to reach maturity.

7. There Are Some Good Ones

I stink you not! It’s true that most stink bug species are harmful to personal and commercial gardens, some species are agriculturally beneficial. Two beneficial species living in the United States are the spined soldier bug and the two-spotted stink bug. While most stink bug species feed on crops, these species actually feed instead on other agricultural pests, like caterpillars, and Colorado potato weevils. They may be stinky, but these particular species are definitely good to have around our crops and gardens!

8. Stink Bugs Have No Mouth

You read correctly – no mouths! Stink bugs have anterior body parts for taking in food. Pricking and sucking body parts if you must ask. They aren’t capable of biting or chewing, which is one bit of good news. Stink bugs use their mouthparts to penetrate into their prey and vacuum out the nutrients they need. Most stink bugs eat only fruit, so that’s about the least gross thing about them.

Since their ‘mouths’ aren’t really good for anything but extracting nutrients, stink bugs use other methods to communicate with one another, and they’re surprisingly sophisticated. They expand and contract their abdomens, creating friction to vibrate on whatever plant they’re on at the time. Stink bugs will even move to specific types of plants, certain corns or beans, for instance, to transmit their vibrations more effectively. Stink bugs employ these vibrations in their mating rituals, making the stink bug’s choice of plant vital to reproducing the species. Who would have thought that stink bugs were so plant-savvy?

During the colder months, stink bugs are noticeably less active. This state is known as “diapause,” and it is not unlike mammalian hibernation. Whilst in the state of diapause, stink bugs are able to live for prolonged periods of time without taking in any nutrients.

Much like in mammalian hibernation, the stink bugs’ metabolism slows down and body (if you can call it that) temperature drops considerably. What makes diapause different from hibernation is that diapause does not last for all of winter. Fortunately, diapause precludes stink bugs from reproducing, so they will not lay eggs in your home during this time. They are only able to reproduce when the weather gets warm enough.

11. The Stink Bugs Of The Garden State

New Jersey is home to almost a dozen stink bug species, but the one that takes pride of place is the brown marmorated variety, which has been in the headlines of late for the infestations of this species popping up across the Garden State. People have reported indestructible infestations numbering in the tens of thousands. But other species of stink bug can be found in New Jersey.

The other species of stink bug that are found in New Jersey are the green burgundy, blue shield, rough, spined soldier and two-spotted (the beneficial ones!), black and red, anchor, rice, and black varieties.

If you’re in New Jersey and have a stink bug problem, don’t hesitate to call in the professionals. Twin-Boro can help to remove and prevent stink bug infestations at home or on commercial properties. 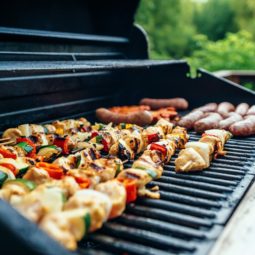 Bed Bug Search Guide for Home and Business Owners
If you’ve ever encountered bed bugs, you know what a nightmare they can be to deal...
Read More How to Detect a Bed Bug Infestation
There seem to be more and more bed bug infestations occurring in New Jersey recently,...
Read More